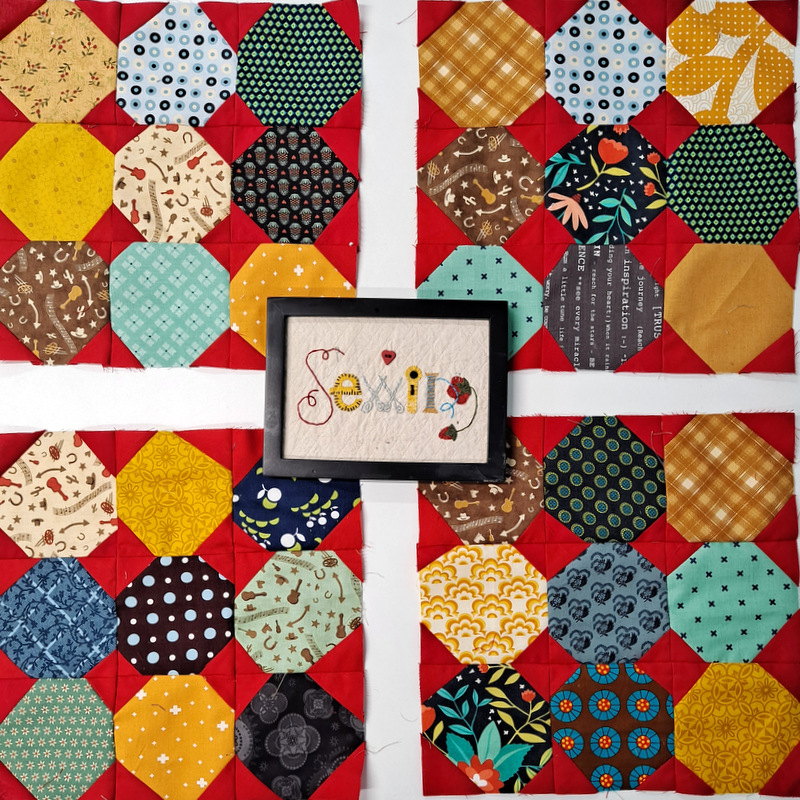 Do you have old projects that you’ve forgotten what the original plan was? Over a year ago I pulled a bunch of scraps from my stash. My plan was to create a new man quilt. First, I cut them into 4 1/2″ squares and grabbed some pretty Kona Poppy to go with them. Then Covid happened, along with it something pretty amazing that I’ll share later this year. So this little project got set on a shelf.

I know I had a plan when it went on the shelf. But when I pulled it off recently that plan was no longer in my head. Am I alone in this dilemma? Have you ever set a project aside? Only to discover it months, even years later and not been able to remember what the original plan was? Well, that was where I was.

I did know that the original plan was to turn the squares into snowball blocks. So while my brain came up with another plan I made wonky snowball blocks. Once the blocks were made I thought they would look good grouped in sets of nine. Once again I got busy. As my pile of nine patches grew I realized if I used all my snowball blocks I would have a ginormous quilt. I decided to stop and 30 blocks.

As soon as my design wall was up in my new sewing room. (Watch for a tour coming soon.) I threw the blocks on it. Because I had so many snowball blocks still left over I used them as corner stones. Even doing this there were a lot extra snowball blocks. Who knows what I was thinking. Those that don’t make it on the front will end up on the back. Heaven know I don’t need more orphan blocks.

Next sashing strips were cut from the kona poppy I had used in the corners of the snowball blocks. I love using a background other than white. It may have to do with the fact that I’m a mother of boys. Gain insight on using different colored backgrounds in this blog post. Find lots of great solids to use as background here.

That is how I took an old project and created a new plan. Now to sew it all together.